More than half of health care workers infected with SARS-CoV-2 developed post- COVID-19 syndrome (PCS), with the highest rates occurring at 7 to 8 months after symptom onset. according to study results published in The Journal of Infectious Diseases.

Although approximately 60,000 people in the United Kingdom have PCS, longitudinal observational studies are needed to provide additional information on how PCS may affect individuals infected with SARS-CoV-2. Calculating the longevity of antibody response to SARS-CoV-2 infection could help  determine whether a patient requires vaccination or vaccine boosters, and may also affect the risk of developing PCS. To address these concerns, a team of UK-based investigators conducted a longitudinal, descriptive analysis of health care workers at a hospital in North West London, England.

Health care employees who tested positive for SARS-CoV-2 between March and April, 2020, were eligible to participate. First serum samples for anti-SARS-CoV-2 antibody testing were obtained between 27 and 69 days following symptom onset. Investigators followed up with a questionnaire between 7 and 8 months after symptom onset to assess PCS symptoms. PCS diagnosis was made using the National Institute for Health and Care Excellence definition and guidelines.

A total of 42 staff members (36 women; mean age, 43 years) were enrolled in the analysis. Eligible participants were either asymptomatic (n=3) or symptomatic but did not require hospitalization (n=39). A total of 38 participants completed the questionnaire (90%).

Of those who completed the questionnaire, 21 participants self-reported at least 1 ongoing symptom, including fatigue (57%), loss of smell (29%), breathlessness (24%), and difficulty concentrating (24%).

In addition, 38%, 29%, and 33% of participants with PCS had 1, 2, or 3 or more ongoing symptoms, respectively. Neither being female (P =.181) nor being from a minority ethnic group (P =.07) was significantly associated with developing PCS; however, study limitations, such as small group size and the 1-time collection of PCS information, might factor for statistical insignificance.

At 6 months, 89% of staff members who continued to give serum samples (n=37) had detectible antibodies. Differences in serial antibody binding ratios between PCS and no PCS were not statistically significant.

“Our knowledge of PCS remains in its infancy, with an urgent need to understand its [etiology] and treatment,” the investigators concluded.

Disclosures: Some authors have declared affiliations with or received grant support from the pharmaceutical industry. Please refer to the original study for a full list of disclosures. 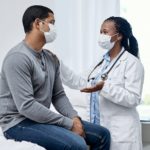