Neuropathological changes in patients with coronavirus disease 2019 (COVID-19) are relatively mild, with neuroinflammatory changes in the brain stem most often found, according to study results  published in Lancet Neurology.

Of the 43 patients, 40 (93%) had adequate samples for detection of SARS-CoV-2 by immunohistochemistry, and 27 (63%) patients had samples available for the detection of the virus by qRT-PCR. Ischemic lesions in the brain were documented in 6 (14%) patients, and astrogliosis in 37 (86%) patients in the studied regions of the brain.

SARS-CoV-2 RNA or proteins were detected in brain tissues of 21 (53%) patients, and both were identified in 8 (20%) patients. SARS-CoV-2 viral proteins were found in cranial nerves originating from the lower brainstem and in isolated cells of the brainstem.

There was no association observed between the presence of SARS-CoV-2 virus in the central nervous system and the severity of neuropathological changes in the brain.

The study had several limitations, including its descriptive design, the absence of age- and sex-matched controls, relatively small number of available post-mortem specimens, and no available clinical data to establish clinicopathological correlations.

“[N]europathological alterations in the brains of patients who die from COVID-19 are relatively mild, although the virus is able to gain access to the brain. The neuropathological alterations are most likely to be immune-mediated, and there does not seem to be fulminant virus-induced encephalitis nor direct evidence for SARS-CoV-2-caused CNS damage,” concluded the study researchers. 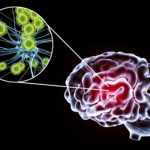 SARS-CoV-2 Associated With a Spectrum of Encephalitis