Findings from the phase 3 ORBIT-4 trial show that inhaled liposomal ciprofloxacin (ARD-3150) is associated with a longer median time to first pulmonary exacerbation vs placebo in patients with non-cystic fibrosis bronchiectasis and chronic P aeruginosa lung infection requiring antibiotic therapy. Despite this finding, ARD-3150 had no such effect in the ORBIT-3 trial or in the pooled analysis of the ORBIT-3 and ORBIT-4 trials, according to a report published in Lancet Respiratory Medicine.

The ORBIT-3 (ClinicalTrials.gov Identifier: NCT01515007) and ORBIT-4 (ClinicalTrials.gov Identifier: NCT02104245) phase 3 trials were double-blind, placebo-controlled trials that ran concurrently. Patients included in each study had non-cystic fibrosis bronchiectasis, ≥2 pulmonary exacerbations managed with antibiotics in 12 months before enrollment, and a clinical history of chronic P aeruginosa lung infection. In ORBIT-3, 183 patients were randomly assigned to ARD-3150 and 95 were randomly assigned to placebo, and in ORBIT-4, 206 patients were allocated to ARD-3150 and 98 to placebo.

A pooled analysis of the 2 studies was performed, which included 389 patients in the ARD-3150 group and 193 patients in the placebo group. ARD-3150 consisted of 3 mL liposome encapsulated ciprofloxacin at 135 mg and 3 mL free ciprofloxacin at 54 mg vs placebo, which consisted of 3 mL dilute empty liposomes mixed with 3 mL saline. Treatment and placebo were self-administered once per day for six 56-day treatment cycles totaling 48 weeks. Time to first pulmonary exacerbation from randomization to the 48-week follow-up was the primary end point.

The hypothesis-generating nature of the findings, as well as the inclusion of a relatively small number of participants in the final cohorts of each study, represent limitations of the overall analysis. 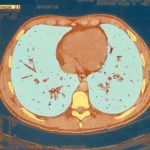