Continuous positive airway pressure (CPAP) therapy did not reduce the burden of atrial fibrillation (AF) in patients with paroxysmal AF and central or obstructive sleep apnea (OSA), according to research results published in the American Journal of Respiratory and Critical Care Medicine.

Consecutive adult patients between 18 and 75 years of age diagnosed with paroxysmal AF were screened for sleep apnea. Those with moderate to severe sleep apnea (apnea-hypopnea index ≥15/h) were eligible for inclusion. Participants were randomly assigned 1:1 to either autotitrating CPAP plus usual care for 5 months or to continue usual care alone. The primary study endpoint was the difference between CPAP treatment and usual care in terms of AF burden, measured by loop recorder, from baseline to the final 3 months of the intervention period.

During the final 3 months of the intervention, median CPAP pressure was 6.8 cm H2O (interquartile range, 6.0-9.0 cm H2O), and mean time of CPAP use was 4.4±1.9 hours per night. Residual apnea-hypopnea index was 2.3±1.9 events per hour during CPAP use, demonstrating good sleep apnea control.

From baseline to the final 3 months, participants in the CPAP group reduced their time in AF a total of 0.6 percentage points more than the control group  (95% CI, -2.55 to 1.30; P =.52) — indicating no effect of the CPAP intervention. A total of 6 patients in this group also started either amiodarone or flecainide treatment because of symptomatic AF during follow-up. However, there were fewer cardioversions in this group compared with the control group (3 vs 6).

The percentage of patients who experienced at least a 25% reduction in AF burden was 41% in the CPAP group compared with 31% in the control group, but between-group difference was nonsignificant (-9.3 percentage points; 95% CI, -2.6 to 8.7). Continuous positive airway pressure use at least 4 hours per night did not improve the effect of treatment on the primary endpoint. Duration of AF did not appear to affect the outcomes of CPAP therapy.

A total of 9 serious adverse events occurred in 8 patients: 7 in the CPAP group and 2 in the control group. Study limitations include a relatively small sample size, a “lower than anticipated” observed percentage time in AF, and a lack of generalizability outside of this specific study population.

“To our knowledge, this is the first prospective, randomized controlled study to evaluate the effect of CPAP treatment on the burden of AF,” the researchers wrote. “Despite observational data suggesting that OSA is a cause of AF recurrence after cardioversion and pulmonary vein isolation, CPAP treatment does not seem to reduce or prevent paroxysmal AF.” 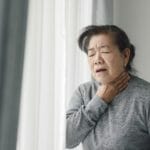