Although nasal continuous positive airway pressure (CPAP) is recommended as the first-line treatment for most patients with obstructive sleep apnea (OSA), and its efficacy is well-supported, there is a high rate of nonadherence associated with this modality. It is estimated that up to 50% of patients discontinue CPAP use within the first week, with additional patients discontinuing use within 3 years.1

However, a viable alternative treatment to CPAP and other OSA interventions is the electrical stimulation of the hypoglossal nerve.

“While feasibility and efficacy of this approach has been demonstrated in studies dating back to the 1990s, the technology was then successfully refined to a point that allowed its use in routine practice,” said Robson Capasso, MD, chief of sleep surgery, associate professor of otolaryngology and head and neck surgery at Stanford University School of Medicine, and global advisor to Stanford Byers Center for Biodesign in California. “Hypoglossal nerve stimulation therapy is usually considered in selected patients with moderate to severe OSA who fail medical treatment (most commonly CPAP), are not significantly obese (BMI <32 kg/m2), are medically stable to undergo surgery, and present a favorable anatomy on an upper airway endoscopy under sedation,” Dr Capasso told Pulmonology Advisor.

A recent review published in CHEST described the proposed mechanisms and available research on outcomes associated with hypoglossal nerve stimulation.1 Previous findings suggested that “disturbance[s] in lingual and pharyngeal neuromuscular control led to increases in airway collapsibility during sleep,” the authors wrote. Electrical stimulation of upper airway muscles — particularly the genioglossus — was designed to overcome these impairments by augmenting dilator muscle tone.

In addition to the presumed primary role of the genioglossus, findings indicated that other lingual, cervical, and pharyngeal strap muscles, including tongue protrudors and retractors, also contribute to the maintenance of airway patency. Researchers found that “combined stimulation of protrudors and retractors (via the proximal hypoglossal nerve) produced comparable increases in airway patency, suggesting a role for both tongue muscles in the maintenance of airway patency during sleep,” as explained in the review.1 “Thus, data accumulated from animal and human studies suggested therapeutic efficacy for stimulating the hypoglossal nerve to recruit lingual protrudors with and without retractor[s].” 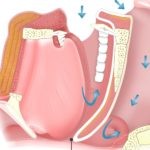