In patients with suspected obstructive sleep apnea (OSA), nocturnal hypoxemia increased the risk for incident hospitalized atrial fibrillation (AF), according to a study published in CHEST.

A total of 8256 adults without arrhythmia who had been diagnosed with or suspected of having OSA and were referred to an academic hospital in Ontario between1994 and 2010 for a diagnostic sleep study were included. Using Cox regression analyses, researchers evaluated associations between the severity of OSA, as defined by the apnea-hypopnea index (AHI) and the degree of nocturnal hypoxemia, with incident hospitalized AF. Up to >30% of sleep time with oxygen saturation <90% defined severe nocturnal hypoxemia. Time from enrollment to first hospital admission for AF or atrial flutter comprised the primary outcome. The International Classification of Diseases-9 (427.3) and International Classification of Diseases-10 (I48) codes identified AF in this study.

Findings from this study may be limited in generalizability because only adults from a single Canadian center were included in the analysis.

“These findings support a relationship between OSA, chronic nocturnal hypoxemia, and the development of [AF], and may be used to identify those patients with OSA who are at greatest risk [for AF] developing,” the researchers concluded. 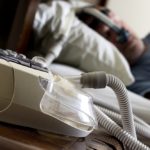