In patients with bronchiectasis, community-acquired pneumonia (CAP) and non-pneumonia exacerbations (NOCAP) have similar clinical presentations with the exception of fever, leukocytosis, and C-reactive protein (CRP) — all of which are more likely to occur with CAP — according to the results of a study published in the Journal of Infection.

Researchers conducted a prospective observational study of consecutive cases of NOCAP and CAP from 4 Spanish hospitals to compare the clinical and microbiologic characteristics of these diseases in adults with bronchiectasis.

Bronchiectasis is a complex disease associated with recurrent bronchial infections. The investigators hypothesized that patients with bronchiectasis presenting with CAP or NOCAP exacerbations would differ in terms of clinical characteristics, microbial etiology and outcomes.

The investigators recruited 144 patients with bronchiectasis, 33% of whom had CAP, while the rest had NOCAP. Patients with CAP were older and more likely to be men and have more comorbidities, higher arterial hypertension, and chronic obstructive pulmonary disease (COPD). They were less likely to have bronchial chronic infection and had fewer exacerbations in the previous year than patients with NOCAP.

Although clinical presentation was similar in both CAP and NOCAP, CRP, glucose, and leukocyte levels were higher in patients with CAP, and fever was more likely to accompany CAP. A CRP of ≥8.38 mg/dL was significantly predictive of CAP, with a sensitivity of 63.6% and a specificity of 74.4%. Streptococcus pneumoniae was the most common pathogen identified in CAP (30.6%), while Pseudomonas aeruginosa was the most common pathogen identified in NOCAP exacerbations (51.6%). Outcomes such as hospitalization rates, mortality, and long-term relapse were similar in both groups.

Limitations of the study included the use of chest radiography for diagnosing CAP, the fact that microbiologic study was not available in all cases, although nearly all of the patients had at least one respiratory sample, and that the study was not powered to detect differences in mortality rates.

The researchers concluded that a CRP ≥8.38 mg/dL can be useful to differentiate between CAP and NOCAP in patients with bronchiectasis. 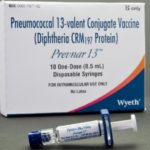