While methamphetamine use had been implicated in myocardial infarction, cardiac arrhythmias, and ischemic cardiomyopathy, recent reports have indicated that intravenous (IV) methamphetamine also attacks the lung tissue.1 Data compiled at a Stanford University pulmonology clinic in California reported that 85% of drug-induced pulmonary arterial hypertension (D-PAH) stemmed from methamphetamine use.1 The prognosis for these patients was substantially worse than for patients with idiopathic PAH; the median 5-year survival for patients with D-PAH was 35%.1

In patients with a history of IV drug use, HIV and hepatitis C virus (HCV) coinfection can complicate the course of PAH.2 Individuals with HIV who have a higher risk for PAH include women, IV drug users, and have HCV coinfection.2 Inquiring about interferon therapy in patients with a history of HCV and IV drug use is essential because interferon alpha and beta have been linked to left ventricular systolic dysfunction.2

Other Drugs Linked to PAH

Although methamphetamine-associated D-PAH is a recent phenomenon, other drugs have been implicated in PAH for longer than 50 years.1 Around that time, amphetamine diet pills that led to PAH were taken off the market.1 Today experts recognize that PAH complications arise from both US Food and Drug Administration (FDA)-approved and illicit drugs.1

Documented drugs implicated in PAH include:

Illicit drugs likely to cause PAH include:

Although the course of D-PAH may be indistinguishable from idiopathic PAH, the former has a more unpredictable prognosis.1 Both types of PAH lead to right heart failure and often occlusive arterial disease.1

Another Look at Idiopathic PAH

When Kelly M. Chin, MD, associate professor of pulmonology from University of Texas Southwestern Medical Center in Dallas, and colleagues, examined potential causes of idiopathic PAH in 2006, they found that almost one-third of 340 cases were attributed to methamphetamine use.3

“We found a significant association between the use of stimulants, particularly methamphetamine, and unexplained PAH,” said Dr Chin. “Subsequent studies have found a similar association, including among non-IV drug users (inhaled, oral). Our hope is that clinicians will be particularly thorough in their drug and substance use histories in PAH patients.”

“Demographic features are often surprising — stimulants are used by some [patients] recreationally, but in other cases patients are using or abusing them to stay awake or to try and treat fatigue or other medical issues,” Dr Chin continued. “I have found some patients taking ‘just a little’ each morning just to get themselves going who were seemingly quite functional and did not fit typical methamphetamine stereotypes.”

Although the study was conducted before the peak of the opioid epidemic, recent data on drug-induced PAH have not linked it to opioid abuse. “Opioids are not thought to contribute to PAH, though a few case reports involving recurrent embolization of talc and other substances from injecting crushed pills have been reported,” Dr Chin noted.

When a drug meant to be taken orally is injected, the fragments of the tablet can lodge in the arteries, causing a pulmonary embolism.4 Because tablets are typically manufactured with a thickening agent, they are often not water soluble, and as a result can obscure vasculature.4 The most common sites for embolisms include the lungs, any organ system, the liver, the kidneys, and the heart.4 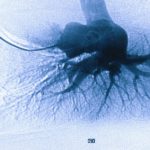