There was no difference in long-term survival in patients with pulmonary arterial hypertension (PAH) initially treated with endothelin receptor blocker (ERA) monotherapy compared with phosphodiesterase-5 (PDE5) inhibitor monotherapy, according to a study published in the American Journal of Respiratory and Critical Care Medicine. However, age was an important modifier, with ERA monotherapy associated with lower mortality in younger patients compared with PDE5 inhibitor monotherapy, while the opposite was true in older patients.

Gustavo A. Heresi, MD, MS, of the Department of Pulmonary & Critical Care Medicine, Respiratory Institute at the Cleveland Clinic in Ohio, and colleagues, conducted a retrospective cohort study in patients with PAH initially treated with either an ERA or a PDE5 inhibitor. Patients who received a second agent within 8 weeks were excluded from the study. All-cause mortality was the primary outcome.

In the ERA group, there were 48 deaths (52.7%) and in the PDE5 inhibitor group there were 71 deaths (48.6%). No difference was noted in time to clinical worsening (death, lung transplantation, or PAH hospitalization) between the 2 groups. In younger patients, mortality was lower in patients treated with an ERA. The difference was most pronounced in white women younger than 45 taking an ERA, in whom the hazard ratio (HR) for death was 0.43 (P =.03), while in women older than 65 the HR for death was 1.80 (P =.02).

The investigators noted that this is the first study to demonstrate that age modifies the response to different types of PAH therapy. They also noted that early treatment with an ERA or PDE5 inhibitor leads to differences in long-term mortality, particularly in younger patients.

The researchers suggested that these data offer support for a more targeted approach to PAH therapy, but cautioned that more studies are needed to demonstrate the efficacy and safety of this strategy. 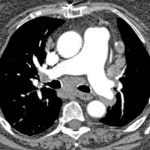