Off-label use of riociguat, when dosed cautiously, may be considered for select pediatric patients with severe pulmonary arterial hypertension (PAH) following comprehensive hemodynamic evaluation in the catheterization laboratory, according to the results of a recent first-of-its-kind German case study published in Pulmonary Circulation.

Although riociguat has been approved for use in adults with PAH or chronic thromboembolic pulmonary hypertension, no clinical data are currently available on the therapeutic use of the agent in children. The investigators reported on the case of a 4-year-old boy who was seen initially when he was 10 months of age and at that time had suprasystemic PAH, right ventricular (RV) failure, vomiting, peripheral cyanosis, and failure to thrive. Cardiac catheterization was performed in the infant, revealing the presence of severe precapillary PAH. Because of radiologic suspicion of interstitial lung disease, repeated computed tomography scans and an open-lung biopsy were performed, but a diagnosis of PAH could not be established unequivocally.

Based on results of vasoreactivity testing in this patient, combination therapy with the calcium channel blocker amlodipine and the endothelin-1 receptor antagonist bosentan was initiated. After 2 years, based on the presence of persistently systemic PAH with lost vasoreactivity, the boy’s treatment was switched to bosentan plus the phosphodiesterase-5 inhibitor sildenafil. When no significant improvement was reported with this latest treatment regimen, the patient was referred to the investigators’ institution in Hannover, Germany — the Hannover Medical School/University of Hamburg department of pediatric cardiology and critical care.

Invasive hemodynamic evaluation demonstrated the presence of suprasystemic PAH and marked acute vasoreactivity. The researchers subsequently switched the patent from sildenafil to the oral-soluble guanylate cyclase stimulator riociguat. Following 6 months of treatment with bosentan plus riociguat, a marked decrease in pulmonary vascular resistance/systemic vascular resistance ratio and transpulmonary gradients, along with a reduction in RV hypertrophy, pulmonary acceleration time, and left ventricular eccentricity index, was observed in the child.

The researchers concluded that the clinical improvement observed in this patient — from pediatric functional class 2/3 to class 1 — suggests that the off-label use of oral riociguat can be considered in certain children with severe PAH. This treatment strategy warrants further investigation in larger case series and, if possible, in a protocol-driven prospective pediatric PAH study in the future. 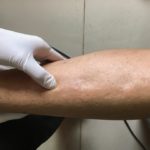