Individuals with PH who presented for initial hemodynamic evaluation at 2 tertiary care medical centers were enrolled in the study (mean age, 64 ± 10 years). A total of 83 patients and 51 patients had idiopathic PAH and lung disease-associated PH, respectively. During the initial visit, patients underwent echocardiograms with standard views, and clinicians assessed right ventricular (RV) size and RV systolic function. Baseline hemodynamic and other patient characteristics were compared between the idiopathic PAH and lung disease-associated PH groups, particularly as these characteristics related to long-term survival.

Mortality was not significantly different between either group (P =.16). In patients with lung disease-associated PH, those presenting with interstitial lung disease had a significantly worse survival vs those with obstructive pulmonary disease (29% vs 54%, respectively; P =.05). Improved survival in the lung disease-associated PH group was associated with mild to moderately elevated mean pulmonary arterial pressures (P =.04) and PVR of <7 Wood units (P =.001). There was no association between vasoreactivity and improved survival (P =.64). Higher mortality was observed in patients with PVR ≥7 Wood units (hazard ratio, 3.59; 95% CI, 1.27-10.19; P =.02).

Limitations of the study include its retrospective nature as well as the lack of medication data (ie, timing and duration of medications) and follow-up catheterizations.

“Given the limitations of noninvasive testing and the important prognostic information provided by direct hemodynamic assessment,” the researchers commented, “earlier and more routine use of cardiac catheterization would be beneficial in this population.”

Disclosures: Richard A. Krasuski, MD, is a consultant for and receives research funding from Actelion Pharmaceuticals. He also serves as an investigator for Abbott and Edwards Lifesciences and is an unpaid member of the scientific advisory board for Ventripoint. 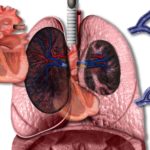