Fewer than 25% of patients with idiopathic pulmonary fibrosis (IPF) who were treated with the antifibrotic drug pirfenidone showed signs of disease progression, according to the results of a recent study published in Respiratory Research.

Forced vital capacity (FVC), diffusing lung capacity for carbon monoxide (DLCO), and mortality were investigated in patients with IPF in the EMPIRE registry. Individuals taking pirfenidone were compared with those not taking antifibrotic medication at treatment initiation, as well as 6-, 12-, 18-, and 24-month follow-up. Disease progression, as measured by FVC decline, was considered at 2 values (≥5%, ≥10%) and/or by DLCO decline at 2 values (≥10%, ≥15%).

Of the 841 patients with IPF in the EMPIRE registry, 383 received pirfenidone and 218 did not receive antifibrotic treatment. The remaining 240 patients were excluded because of a diagnosis change, missing information, or a medication change. In patients in the pirfenidone group, less than a quarter of the patients had disease progression at the 2-year follow-up, as assessed by the decline of ≥10% FVC (17.0%) and ≥15% DLCO (14.3%). Furthermore, the DLCO (≥10%) declines at 6, 12, 18, and 24 months’ and DLCO (≥15%) declines at 6, 18, and 24 months’ follow-up were associated with increased mortality. Finally, the DLCO decline showed higher predictive value for mortality than FVC decline 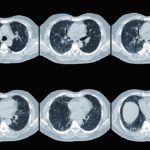