Anti-acid therapy use should be discouraged in patients with systemic sclerosis interstitial lung disease (SSc-ILD), according to study results presented at the European League Against Rheumatism (EULAR) 2020 E-Congress, held online from June 3 to 6, 2020.

Study limitations included potential bias because of certain baseline characteristics. Nevertheless, the researchers concluded that their analysis “disfavors” the use of anti-acid therapy in SSc-ILD.

(HealthDay News) — An increase in the number of avoidable cancer deaths is expected in England as a result of diagnostic delays due to the COVID-19 pandemic, according to a study published online July 20 in The Lancet Oncology.

Camille Maringe, Ph.D., from the London School of Hygiene and Tropical Medicine, and colleagues estimated the impact of diagnostic delays during a 12-month period starting from commencement of physical distancing measures on March 16, 2020. To model the subsequent impact of diagnostic delays on survival, patients on screening and routine referral pathways were reallocated to urgent and emergency pathways; three reallocation scenarios were considered.

“As we slowly begin to resume normal life, we need accurate and measured public health messaging via a range of media channels tailored towards patients, general practitioners, and secondary care, that puts into perspective the risk of death from COVID-19 compared with that of delaying cancer diagnosis,” Maringe said in a statement. “Similarly, the health care community needs evidence-based information to adequately manage the risks of patients to the risks and benefits of contracting COVID-19 through different diagnostic procedures.” 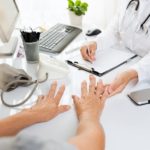