In patients with idiopathic pulmonary fibrosis (IPF), no limiting safety or tolerability signals were identified with the addition of valganciclovir to pirfenidone therapy, according to the results of a phase 1 trial published in Annals of the American Thoracic Society. Researchers conducted a prospective, single-center, randomized, placebo-controlled pilot study (ClinicalTrials.gov Identifier: NCT02871401) at the Interstitial Lung Disease Clinic at Vanderbilt University in Nashville, Tennessee.

Recognizing that the human herpesviruses Epstein-Barr virus (EBV) and cytomegalovirus (CMV) are often detected in the lungs of patients with IPF, the investigators sought to test the safety and tolerability of adding valganciclovir to standard IPF therapy (ie, pirfenidone) with the goal being to inhibit herpesvirus replication.

Eligible participants had to meet the following criteria: (1) having definite or probably IPF diagnosis, based on American Thoracic Society guidelines, who were receiving stable-dose treatment with the antifibrotic agent pirfenidone for more than 1 month; (2) having evidence of prior EBV or CMV infection, as established by serologic testing for anti-EBV and anti-CMV immunoglobulin G (IgG) antibodies; (3) having forced vital capacity (FVC) of more than 40% predicted, diffusing capacity of the lung for carbon monoxide of more than 30% predicted, and forced expiratory volume in 1 second/FVC of more than 0.7 by pulmonary function testing; (4) having resting oxygen saturation of more than 89%; and (5) being between the ages of 21 and 80 years.

A total of 31 patients with IPF were randomly assigned to either valganciclovir 900 mg daily (n=20) or placebo (n=11) for 12 weeks of active treatment and off-treatment follow-up for 12 months.  All participants had been tolerating full-dose pirfenidone 2403 mg daily. The primary safety endpoint was the number of participants who discontinued the study drug prior to completion of the 12-week treatment period.

Limitations of the study included its small sample size, the rather short duration of treatment, restriction of the treatment to patients who were already tolerating full-dose pirfenidone, and its single-center design. The researchers concluded that the preliminary efficacy data from this trial support the feasibility of conducting a larger study with adequate power to focus on efficacy endpoints. 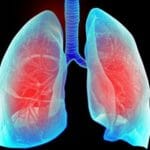