Kentucky has about 4000 new cases of lung cancer each year, according to Ellen J. Hahn, PhD, RN, FAAN, of the University of Kentucky College of Nursing in Lexington. If, however, there were strong smoke-free ordinances in every county of the state, there would likely be many fewer lung cancer cases each year, according to the results of Dr Hahn’s study published recently in Cancer.1

Unlike some states with statewide smoke-free ordinances, Kentucky — a tobacco-growing state — has relatively weak policies, according to Dr Hahn.

“Not only do we not have very many smoke-free protections, we also have low tobacco taxes,” she explained. “Places like Kentucky and other states in the Midwest and South aren’t as likely to have these types of laws.”

The study was a secondary analysis of more than 80,000 Kentucky residents aged 50 years or older who were diagnosed with lung cancer between 1995 and 2014. In previous research, Dr Hahn and colleagues found links between smoke-free ordinances in Kentucky and effects on emphysema, asthma, and heart attack. They hypothesized that communities with strong smoke-free laws covering everyone in all workplaces would have fewer cases of lung cancer.

According to Dr Hahn, comprehensive or “strong” smoke-free laws were those that restricted all smoking inside all workplaces, including restaurants and bars. Everyone, Dr Hahn’s reasoning goes, is treated the same in public spaces and workplaces by being able to breath smoke-free air.

“We believe that smoke-free laws, when comprehensive and strong, have a really good chance of reducing the number of lung cancer cases,” Dr Hahn said. “If you extrapolate the data we had over a 20-year period, if we had smoke-free ordinances in every county of our state we would see 325 fewer lung cancer cases a year.”

The study did not, however, show differences in lung cancer incidence among people in counties with only moderate or weak laws and those with no protection.

“Even the moderate laws did not have an effect on risk,” Dr Hahn said. “These laws leave people behind, such as those in manufacturing facilities or other workplaces not open to the public.”

Dr Hahn compared it with antibiotics: “if you do not take enough antibiotics, for example for bronchitis, you are probably not going to get better,” she said.

“Smoke-free laws are like public health vaccines. If you don’t have the proper dose you are not going to have the expected result.” 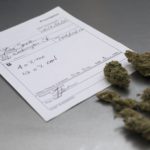 Medical Cannabis Use Not Uncommon for Menopause Symptoms