HealthDay News — The number of smokers is continuing to increase worldwide, and most smokers start smoking before age 25 years, according to two studies published online May 27 in The Lancet and The Lancet Public Health.

Marissa B. Reitsma, from the Institute for Health Metrics and Evaluation at the University of Washington in Seattle, and colleagues estimated the prevalence of smoking tobacco use and attributable disease burden for 204 countries and territories from 1990 to 2019. The researchers found that 1.14 billion individuals were current smokers globally in 2019, consuming 7.41 trillion cigarette-equivalents of tobacco that year. Among both males and females aged 15 years and older, the prevalence of smoking decreased significantly since 1990 (27.5 and 37.7 percent, respectively); however, population growth led to a significant increase in the total number of smokers from the 0.99 billion in 1990.

In a second study, Reitsma and colleagues modeled two indicators using data from 3,625 nationally representative surveys on the prevalence of smoking and 254 on the age at initiation to examine patterns in prevalence of smoking tobacco use and initiation among young people. The researchers found that an estimated 155 million individuals aged 15 to 24 years were tobacco smokers globally in 2019, with a prevalence of 20.1 and 4.95 percent among males and females, respectively. Overall, 82.6 percent of current smokers were estimated to have initiated smoking between ages 14 and 25 years, and 18.5 percent began smoking regularly by age 15 years.

“With nine out of 10 smokers starting before the age of 25, ensuring that young people remain smoke-free through their mid-twenties will result in radical reductions in smoking rates for the next generation,” Reitsma said in a statement.

Several authors from the first study disclosed financial ties to the biopharmaceutical industry. 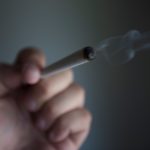